The New Year is coming up and if you need to keep your gaming scene on in the lowest price, you could definitely use this guide. We will be discussing all the accessories for your medium end gaming pc which you can build under a price tag of $600. We are doing this because building a custom pc in this budget is certainly difficult and most gamers fail to get the true worth of their money due to the lack of knowledge.So let us move forward and let build the best gaming pc under $600 2021.

Here would would list different hardware that you can use to build your own pc under 600. 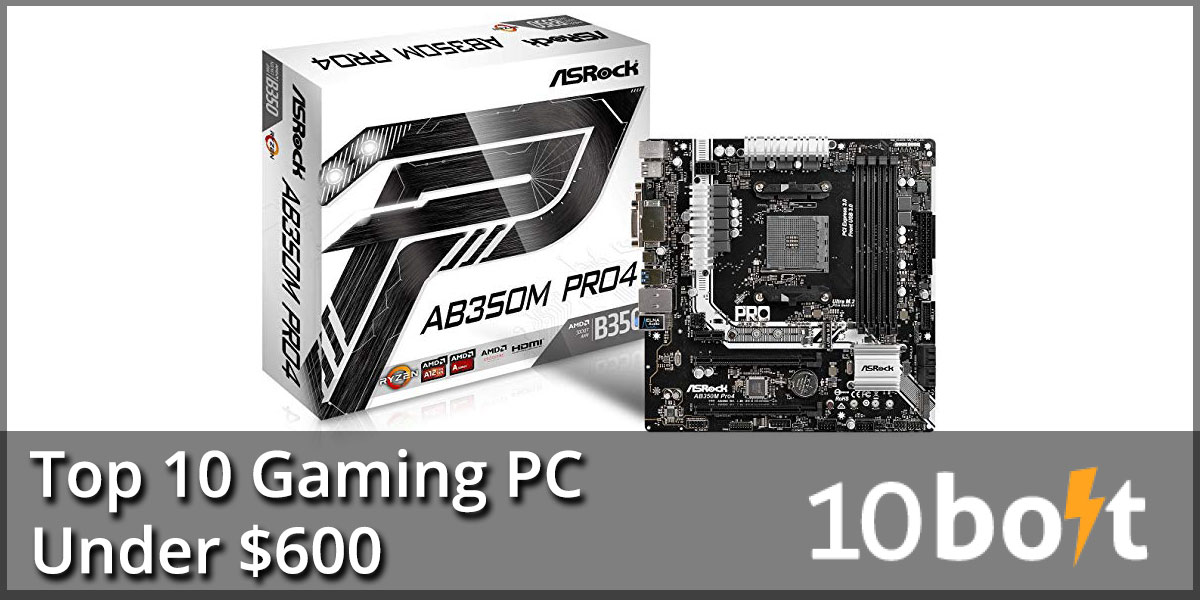 In this budget, it is certainly a difficult thing to decide between the quality motherboards which are out there for you. However, we recommend you to buy this ASROCK AB350M PRO4 Micro ATX Motherboard which has definitely earned his place among the best gaming rigs in the recent years. We expect you to lend a budget of at least a 100 dollars and in this price, this Micro ATX motherboard saves the day. The top features of this quality ASROCK product are:

We had made quite clear in the previous section that the processor we will be recommending you for this pc will be from AMD. It is because the chipset on the recommended motherboard is suited well for the AMD processors and you will enjoy some massive gaming performance over it. So for the processor, we are recommending you this AMD Ryzen 3 2200G for which you will need to spend a budget of $100 and your medium to high-end gaming is ensured right here.

Though we would have recommended something high-end like GTX 1060 then you wouldn’t have the budget remaining for other remaining hardware. That is why to remain between medium and high end, we are now introducing you to Gigabyte GTX 1050 2GB GDDR5 128 Bit which is going to be a perfect choice in this budget. This graphics unit can easily deliver 60 fps at 1080p but not in the current gen games where it can deliver playable fps. As for the rest of the features, they are elaborated below:

To support the above hardware better, we recommend that you get a pair of 4 GB rams which make a total of an 8 GB ram and at 2666 MHz, they are more than enough to handle the above hardware and any game. There is not a single game which could use this ram up to 100% and it is also cost-effective. The top features are:

For storage, we recommend buying this Kingston SSD Now A400 which is known for its faster loading time in games and can handle all the operations running on your pc at the same time without any lag. The top specs of this SSD are:

All of the above gaming hardware can only be powered well if you buy something like this Corsair CX Series 450 Watt 80 Plus Bronze power supplier. It is basically modular and enables you to have a much better control over your power supply. There are all possible connections for everything you want to connect. The top hardware specs are:

So, this was our list of 10 Best Gaming PC Under $600. Hope you would build your dream gaming pc after following this guide.

If you have any confusion then let us know in the comments section below and we would try to help you out.