In gaming hardware, the processor and the graphics unit you buy, their performance is directly proportional to each other. A weak processor cannot handle a heavy gaming card and a powerful processor is useless with a heavy graphics unit. If you have bought a graphics card already, it is the time that you pick your gaming processor from our list of Top 10 Best Gaming Processors 2021. Let’s get going.

How do we choose our Best Gaming Processors 2021?

When my 4th gen Core i7 was brought to its knees by Assassin’s Creed Origins after putting 100% load on it, I realized what these games can do to your system. However, after buying an i7-8700k, the problem pretty much got resolved and I was able to reduce the load to 80% max. You must have realized what is important for these next-gen games and if you need to run them smoothly, you do need a powerful process. No matter how good your GPU is, it will always lag the games if the processor is hitting a 100% load.

For choosing Best Gaming Processors for the Money, we got to have a look of the number of processors, cores, threads, and the maximum power which the processor requires. Also, the processor clock in GHz is important and how much we can overclock it for better performance. However, we do take the things and proportion and while we mention some of the premium processors in an expensive budget, we do mention the economic ones as well. In these reviews, we shall discuss everything in detail alongside the pros & cons and we shall begin!

We have some gaming enthusiasts in our team who have done a lot of research and testing and after that, we have a list of 10 Best Gaming Processors 2021 for you.

Below you can find the list with reviews, features, and pros and cons of all the 10 gaming processors. 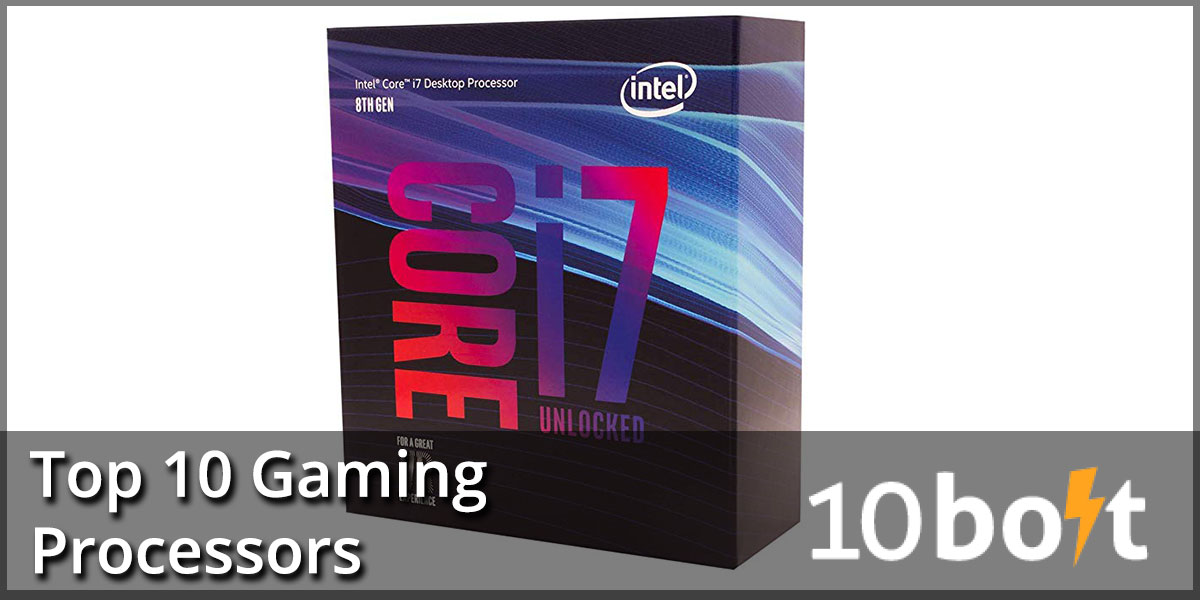 When a gaming processor like Intel Core i7-8700K is mentioned, there does not remain much room for doubt. This is by far the most powerful processor on the planet and if you can pay for it, your gaming year is going to be massive. The product has the following top features:

C’mon, this haven’t been beaten yet so you can get it while it still is the King. This Intel Core i7-8700K is the beast I had to buy to show these games where they belong. This processor has 6 cores and 12 thread inside which might seem fewer as compared to AMD’s 8 threads but in multitasking and games, it still surpasses it a competitor. The base clock of the processor is 3.7 GHz which can be overclocked to 4.7 GHz, however, coping with power consumption would be up to you.

The privileges you get with this Intel Core i7-8700K do come at a cost but having a look at the current price which ranks it among the best gaming processors under 500 dollars, it is quite astonishing. However, the processor consumes a lot of power and even heats a lot which must be controlled with a powerful liquid cooling solution and that is definitely going to increase some of your budgets.

Whenever the name of an Intel processor is mentioned, an AMD processor follows as well. Now, in the same price range, if you can afford which is not AMD’s tradition, by the way, AMD RYZEN 7 1800X is the extreme end processor you can get. It has the following features you should know about:

I have been an AMD user which the feeling is so real when you see this brand nourishing in the department of gaming processors. Also, their products are economical and the gamers who haven’t got the biggest of budgets can still settle for a powerful high-end gaming processor. AMD RYZEN 7 1800X comes an AM4 socket by AMD, features a boost clock of 4.0 GHz, and has 8 cores with 16 unlocked threads. The specs definitely look better than the competitor.

AMD RYZEN 7 1800X has better specs when you have a look but for some reason, these 8 cores and 16 threads fail at performing better an i7-8700k. On the other hand, the things are quite different for games where some of the situations have shown how well a processor by AMD can do. This is especially true for games optimized by AMD where you would see a clear difference in the fps benchmarks as compared to Intel.

After some hard times, while producing these processors, Intel finally struck back with its most powerful gaming processor generation which is now the 8th generation of gaming processors. Another of this series is Intel Core i5-8400. This beast has the following specifications:

Even when I have to stick with the 8th generation of Core i5, I would still prefer Intel over AMD. No matter what the current benchmarks say about these processors where the facts are changing quite rapidly, I seem to be satisfied by the Intel processors both in the department of games and multitasking. Having used it for games, I was amazed to see the performance which brings the satisfaction your face rarely seen on an AMD fan.

Intel Core i5-8400 also comes with 6 cores but has fewer 6 threads, however, that can be changed after buying the extreme edition of the processor. But, that would certainly hurt your pocket and since this is already more than enough for multitasking and games, you don’t have to change it till now. Now get a maximum boost of 4.0 by Intel Core i5-8400 and see how well your games perform.

We have got to stay neutral and must mention the alternative AMD processor for every Intel one. As an alternative for the above i5 processor, here is AMD RYZEN 5 1600X Processor which is another of the latest beasts. The product has the following features:

When you rank an AMD product after an Intel’s, the list seems balanced and it is not just about rankings but also about the performance which gives the right idea about these processors. The next product on the list is AMD RYZEN 5 1600X Processor and some of the experts have claimed that it is a better choice than an i5. Well, when you have a look at the gaming benchmarks, it does seem to do well there, however, multitasking is important and poor performance there cannot be tolerated.

You are now getting this AMD RYZEN 5 1600X Processor as one of the best gaming processors under 200 dollars since its price has fallen down to $170 only. It comes with 6 cores and 12 threads which makes it a better performer in games if you need to an economical processor for 1080p gaming, this must be it. If the threads are needed to load for work, this one is it.

AMD fans must be getting frustrated but now, it is the time for them to relax since a beast from their favorite brand is finally unleashed. AMD RYZEN 5 1400 is a top competitor to these Intel 8th gen processors with following features:

While remaining in the same department of gaming processors which are ideal for 1080p gaming, we are now introducing this AMD RYZEN 5 1400. Although its value has downgraded a lot in the market, it is still performing very well in games and if you need to have proof if that, try playing some of the most wanted next-gen games on it. It is true that it is a poor performance when it comes to 4k but not most of us need that.

AMD RYZEN 5 1400 is one of the most economical processors which are known for their good gaming and multi-core performance. However, like many of its fellas, it doesn’t do well in the overclocking department and you can only enjoy a handful of performance. The processor only has 4 cores and 8 threads making it an i5 equivalent and while it is a lot more economical than the counterparts, some of you can rely on it.

We do care for our low-end gamers as well and that is why we have brought a product like Intel Pentium G4560 which is by far one of the best in the low-end. This smart processor from Intel has following features:

The core frequency of Intel Pentium G4560 is more than enough to play all the games and even the single player gaming modes can be enjoyed if you manage to optimize the settings well alongside your graphics unit. You can run most of the heavy games on medium settings and if you need to run the important software for video editing etc. this processor is still a pretty good thing to have.

Well, the above product from Intel also has its AMD alternative which is a little expensive but has extended and better features. The top features of AMD RYZEN 3 1200 Quad-core (4 Core) 3.10 GHz Processor are listed below:

Just like Intel came up with something very economical in the form of the 6th pick, its competitor is this AMD RYZEN 3 1200 which an i3 equivalent processor. Though it is quite hard for the casual gamers to put their hands in the overclocking department, this Ryzen processor has made it easier and by increasing the clock, you can see a major difference in the performance.

AMD RYZEN 3 1200 is also based on the AM4 architecture by AMD and while it could have been expensive, this processor is not. Also, the price is quite competitive as compared to the rivals.

This was supposed to be an Intel dominating list, however, AMD has become so much better than we couldn’t help but rank the processors they have to offer. Another of the gaming beasts is AMD RYZEN 7 1700 Processor whose features are listed below:

Intel 8th Gen Core i3-8350K Processor has its multiplier unlocked and that sight definitely is a pleasant one for the gamers and video editors. Also, this is one of the best gaming processors under $200 by Intel but it has only had 4 core and 4 threads. Though it would still be more than enough since Intel’s single-core performance has always impressed the users.

Even when you are unable to afford a proper gaming graphics card for your system, you can play some of the older titles on its Intel 630 HD Graphics and for graphics work in different software, this is also quite an optimal option.

Here is Intel back to our list with a processor from an i3 family which could easily handle any graphics card even when there are more of it. The name of the product is Intel BX80684I38350K 8th Gen Core i3-8350K Processor and it has following features for you to offer:

If not for AMD RYZEN 5 1600 Processor, choosing our last pick would have been quite difficult. At a price which most of you can afford, you get a nice and medium-end processor which has the ability to handle any single graphics card while delivering amazing fps. We shall now enlist its top features for you:

Competing well with the 7th generation of Intel processors, AMD has introduced Ryzen 5 1600 which seems quite an ambitious attempt. It is quite hard to imagine such a good processor in a price range of below $200 and especially the ones which have 6 cores and 12 threads. It is also one of the processors based on AM4 architecture.

AMD RYZEN 5 1600 Processor has large L2 and L3 caches which allows the best multi-core performance. However, you will see this one lower in the benchmarks and it is quite sad to know that this processor doesn’t do well when it comes to the single core performance which most games require.

So, this was our list of 10 Best Gaming Processors 2021. Hope you would have gained some knowledge about the gaming processors and would be in a position to select one for your gaming PC. If you are still confused, contact us or use the comments section below so that we can assist you.