When it comes to PC gaming, affording quality graphics is very important. However, if you are running low on budget, you could get a low-end graphics card as well. In this list, we are counting down our picks for Top 10 Best Graphics Cards under $200 2021.

You can read the reviews, features and pros and cons of the top 10 graphics cards below.

So without keeping you waiting any more, let us begin with the list! 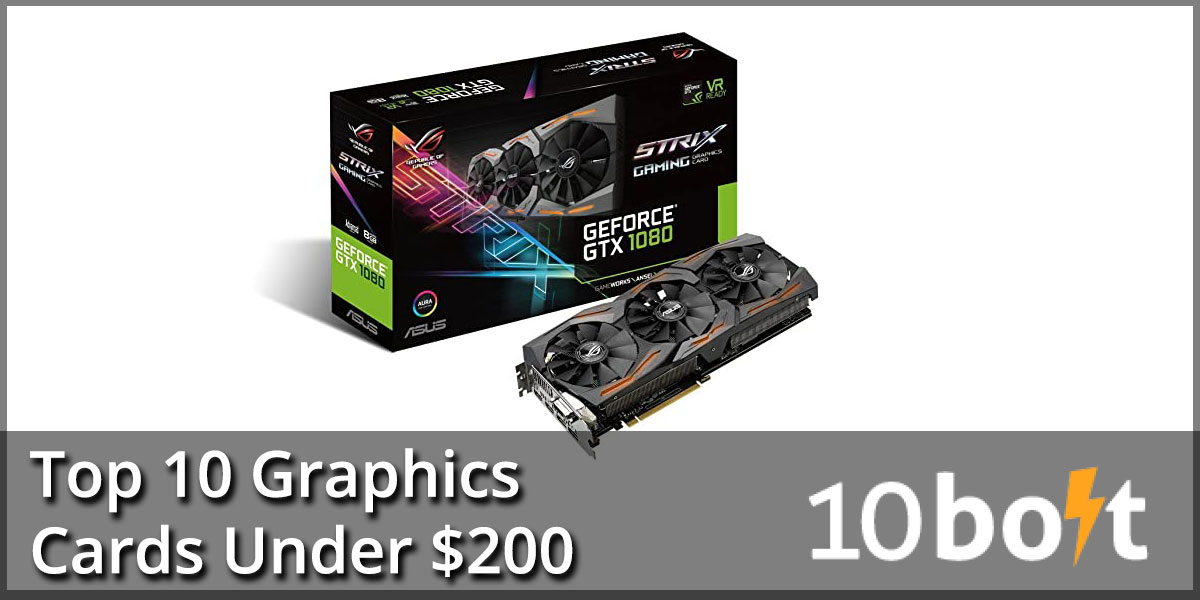 In this budget, the best graphics card you can buy is GTX 1050 2 GB edition from NVIDIA which is based on the GDDR5 technology and can run any current-gen game in at least medium settings while delivering some smooth fps. Also, in 2021, its prices have dropped even more so getting it right now would be perfect.

Nvidia has this great tradition of releasing updates for their older cards as well. This will allow you to play the latest games while getting good frame rates. Also, if you are a pro who takes parts every year in eSports, this card is still relevant for you. You can even play AAA games on this medium-end card.

The top hardware specs of this card are:

Do you want to spend a full sum of $200 on your graphics card? Well, this is something even massive than the first pick but comes at a price where you will save nothing. By raising your budget a little for this card, you you will be getting much better frame rates even in AAA games.

The online competition of PUBG is the latest thing for which the gamers need a ready card. Well, in this budget, this graphics card by Nvidia could be a great option which has all the potential of running this Battle Royale game on high settings.

Let us now explore the features of this MSI GTX 1050ti:

For the AMD lovers, we are now bringing RX 560 which is another medium gaming GPU is completing 1050ti. While it does not beat its competitor in most of the games, you could still get the equivalent performance while saving some good money. For gamers who have got a lower budget, AMD seems to solve a lot of problems.

If you need to play most AAA games at high graphics, buying this MSI RX 560 by AMD could be a great option. It has got a memory clock of 7000 MHz which is paired with the GDDR5 graphics technology. You will see a clear boost in performance after getting it.

Almost an equivalent of the first pick, this one from AMD is now powered by ASUS which you are getting an overclocked edition for their latest RX 550 graphics heat. It is a good choice for high graphics gaming in classic games. This RX 550 by Asus can also deliver the same high performance as RX 560 in a lower price range.

Depending on what your gaming needs are, you can get both the 4 and 2 GB editions of this card. Since this is an enhanced edition of the standard RX 550, the leap in performance has been huge. Also, you aren’t going to need a separate power connector due to the card’s lower power requirement.

It is time to get an upgrade for your RX 550 in case you need to enjoy virtual reality gaming as well. Well, that is possible when you get this 4 GB edition of the MSI card. We have also got a 4 GB edition of RX 550 which could be really handy for both single-player and multiplayer gamers.

Though the performance wouldn’t be so great, this RX 550 is still a VR Ready card which you can get in 2021. With this GPU, getting a gaming PC is a much better option than Ps3 or Xbox 360. You will still be getting the AMD driver updates for this card for free.

For those gamers who do not have the budget to get any of the above products, they still have an opportunity to keep their gaming scene alive with this low-end graphics cards Gigabyte GT730 GDDR5 – 2GB which is really good for classic games and even some latest titles. If you are just getting starting with a low-end gaming PC, this card could be a good option.

We have tested the performance of GT 730 in games like GTA-V and Battlefield 3 which most gamers aim to run on their PC. Well, on lower graphics settings, this card seemed to perform quite. With this graphics card installed, you can now play and enjoy 4k content as well.

Want to go even low-end? Well, you might want to get this MSI Computer VGA Graphic Card GT 710 2GD3 LP which is powered by classic games, however, you cannot hope to run the current and latest titles. Even though we do not recommend this in 2021 for gaming, this card can still do some basic jobs.

Even when you have a 300-watt power supplier installed in your rig, this card can be installed since its power draw is too low. If you wish to run 64-bit smoothly including some games, GT 710 by MSI is still a good graphics card to have.

It has the following hardware specs:

When it comes to low-end, AMD also has a huge arsenal of gaming cards and one of the deserved presentations for this list would be this R7 250 1 GB edition from AMD. We don’t think that Nvidia can beat AMD in these low-end cards like R7 250 which still ensure medium-gaming in 2021.

Even if you install an AMD Radeon R7 250 with a core 2 duo processor, it isn’t going to bottleneck the CPU. This compatibility is something makes us fall in love with this card in the first place.

The top features of this card are:

Just like there was a distinction between 730 and 710, this one is an even low-end to R7 250 which comes with 2 GB video memory and DDR5 technology. This is an upgraded version of a normal 240 making it power efficient. This is recommended for gamers who do not have the budget for R7 250.

Though its performance wouldn’t be as great as R7 250 itself, you can improve that by overclocking the GPU a bit. Yes, it has been unlocked for overclocking. However, make sure that the airflow is proper in your casing since overclocking this card will raise its temperature.

The last pick is also from ASUS and AMD where we are now presenting you this old but still efficient gaming card. If you need to play and enjoy your old generation games, this is still effective as it was in those days. If you are in love with the classic games from the last decade, this card is a great option for running them in 2021

For more products reviews like this visit our site 10bolt.